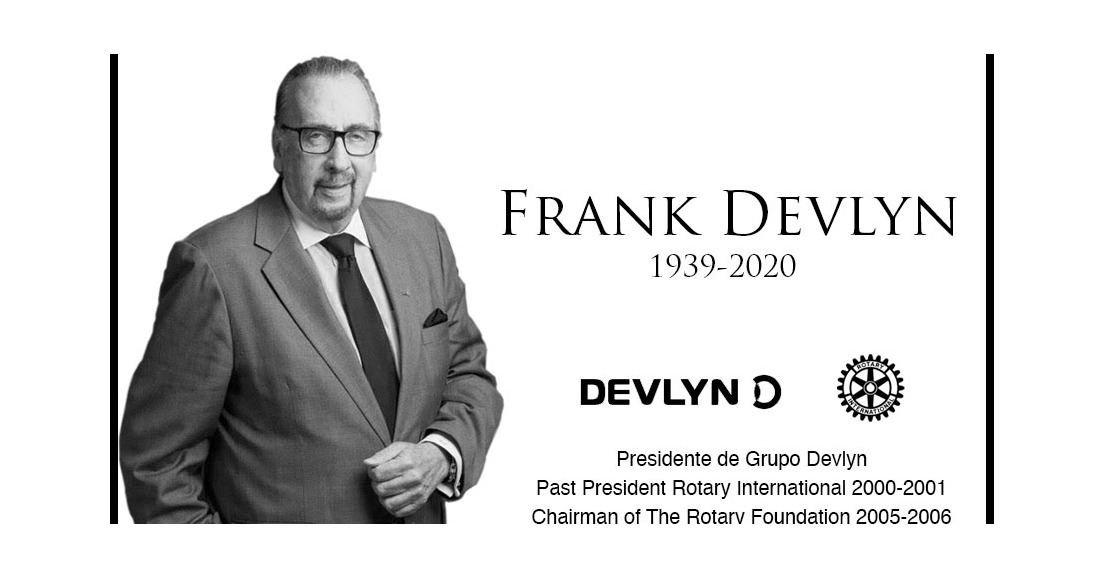 Frank J. Devlyn, a former Rotary International president who encouraged members to think ahead and take quick action on humanitarian issues, died on 27 May.

Devlyn was a friend and a great supporter of ICCs. On March 25, 2001, at an ICC conference organized in Lille, he proclaimed the now-famous phrase “if inter-country committees didn’t exist, they would have to be invented“. This Conference was to mark the starting point of a better recognition of the ICC program by Rotary International.

In addition to his term as RI president in 2000-01, Devlyn served as director, Rotary Foundation trustee chair, aide to the president, International Assembly leader, committee member and chair, Council on Legislation representative, and district governor. Devlyn, who joined Rotary in 1970, was most recently a member of the Rotary Club of Anáhuac Tacubaya, Ciudad México, Mexico. He was the founding editor of the magazines Rotarismo en México and Rotary en México. He also wrote a series of bestselling books called “Frank Talk” on topics such as leadership, public speaking, and Rotary.

The presidential theme during Devlyn’s term, Create Awareness — Take Action, urged Rotary members to be enterprising in addressing some of the world’s most difficult humanitarian issues. To help in this, Devlyn focused many of the 20 task forces he appointed on challenges such as avoidable blindness, crime and violence, the environment, and jobs for people with disabilities.

Devlyn was the president and chief executive of Devlyn Optical Group and had been president of the Optometric and Opticians Association of Mexico. His humanitarian service outside Rotary was extensive. He had been a member of the boards of Goodwill Industries International and the Mexican Red Cross and treasurer of the Tuberculosis and Lung Association of Mexico. Devlyn had also been president of Mexico’s Vecino Vigilante initiative, a neighborhood watch program sponsored by Rotary clubs and other organizations, collectively known as Mexico United Against Crime. He created the largest bank of used eyeglasses in Mexico, which serves as a model worldwide for collecting eyeglass donations and distributing them in cooperation with a network of clubs.

Devlyn was recognized with The Rotary Foundation’s Distinguished Service Award and its Citation for Meritorious Service. Along with his wife, Gloria Rita, he was a member of the Arch Klumph Society. He was awarded the title of Entrepreneur of the Year in Mexico in 2016.

He is survived by Gloria Rita, and three daughters, Melanie, Stephanie, and Jennifer.